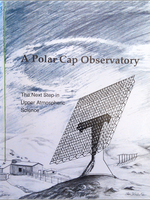 SRI International designed and constructed, and now operates and manages, the Poker Flat and Resolute Bay Advanced Modular Incoherent Scatter Radar (AMISR) facilities. The AMISR has significant advantages over other ISRs in operation, because of the pulse-to-pulse steering provided by the phased array antenna. This rapid steering capability allows scientists to resolve temporal/spatial ambiguities inherent in measurements from mechanically steered dish-based systems. An additional important feature enabled by the AMISR is that the facility can be readily relocated to new regions of scientific interest, resulting in much greater overall utility of the system. Major portions of the AMISR can, in fact, be separately located to provide broad geographic coverage. Many of the scientific issues addressable by the innovative AMISR design were articulated in the Re-locatable Atmospheric Observatory 7–8 April 1999, Workshop Report [NSF, 1999]. 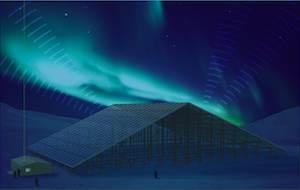 Knowledge of the Earth’s upper atmosphere, ionosphere, and geospace environment advanced significantly during the second half of the twentieth century. A wealth of information was garnered from in situ probes and various remote-sensing techniques in combination with the development of models of the environment, both from first principles and via heuristic approaches. A detailed understanding of even the most basic processes remains somewhat vague, however, because such an understanding must encompass the strongly coupled systems of the Earth’s upper atmosphere, ionosphere, magnetosphere, and the solar wind. At various times and locations, important temporal scales can range from seconds to days, seasons, or even an entire solar cycle. Similarly, the relevant spatial scales range from sub-meters to thousands of kilometers. Thus, while substantial progress has been made, there remain significant gaps in our understanding of the system as a whole.

One of the most powerful remote-sensing instruments available today for probing the ionospheric plasma is the incoherent scatter radar. ISRs measure many of the parameters needed to describe the state and energy balance of this plasma (e.g., electron number density, electron and ion temperatures, bulk ion motion, ion masses, ion-neutral collision frequency). Furthermore, they do this in a spatially resolved sense over regions extending hundreds of kilometers in the hemisphere centered on the radar, and can measure the variations in the ionospheric state continuously over timescales from hours to days, with time resolutions as short as a few seconds for one altitude profile, or a few minutes for measurements versus altitude and ground distance from the ISR.